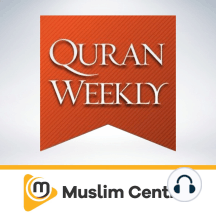 Such a difficult juz to pick something from, I actually had to go back to the twelfth juz again and pick an ayah from Surah Yusuf. This is Surah Yusuf, in the 12th juz, and it’s ayah number 23. In this particular ayah, Allah is talking about temptation.

She kept trying to get him. She was dropping a line or two, and he can’t get away because Allah says الَّتِى هُوَ فِى بَيْتِهَا(allatee huwa fee baytiha), the one in who’s house he was. Rhetorically, by saying her house, meaning she has access to the entire house, he can’t get away from her, everywhere he goes, she’s there.

She’s slowly, little by little, making her advances. He’s a young guy. He just became a teenager. In the previous ayah, Allah describes him coming into manhood. What’s also interesting to note is, when the man of the house first brought him in, he actually recognized the intelligence of this kid.

On the road trip, that isn’t even mentioned in the Qur’an, on the road trip to the house where the minister stayed, he realized this kid is special and that he should be treated with respect. The kid that’s sold as a slave, how does a slave get respect?https://thehypnoacademy.com/oasis-dating-site-login/ The first thing he says to his wife is that she better honor his long term, permanent room. Don’t just give him a room and a bed, no, honor his permanent room.

He wanted it made to be a place to stay for generations. Meaning he wants this kid to be here, to be settled, and he doesn’t want him to go anywhere because he’s a real asset. He recognized that, but he also recognized that his wife has a problem with dignity. He didn’t just say to her to give him a room, he told her to honor her room, meaning don’t just walk into his room, give him his space. I don’t want you to feel like you can just go mess with him anytime you want, or go talk to him and give him instructions.

Even as a kid, he wanted her to keep a distance from him. Was he right on the money? Yes, he was. When the time comes, she starting to seduce him little by little, she’s throwing hints at him as he’s becoming a man. The other thing that’s happening is that رَوَدَ (rawada) also comes from a word that means intention.

They say رَوَدَ (rawada) is when you try to make someone have the same intention that you have. So she’s trying to get him to think like her. “It’s okay, there’s nothing wrong with it, don’t you feel anything?” She’ll say these things like she wants him to think like she thinks. A young man, with the temptations that he has, he’s a regular human being, he doesn’t say that he puts himself above temptation, the Qur’an says she desired him, and he would’ve desired her too had he not seen the evidence of his master. But, the point I wanted to make is, when she really desired him, she wanted him to slip from his own intentions.

His intentions were to stay pure, he wasn’t going indulge in this sort of thing. How many young people can we say that with? A beautiful woman is after you, she says there’s nothing wrong with it, she says it’s fine, she’s the one coming for you.

Usually men are pursuing women, but the woman is pursuing you, and it’s in the privacy of your house. She’s your boss, and she’s saying it’s okay. Of all the rationalizations that are possible, even all the doors are locked, she didn’t just lock one door, she locked multiple doors that had multiple latches on it, so it’s totally private, nobody is going to find out. 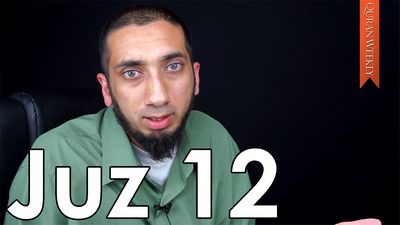 Then she says هَيْتَ لَكَ (haytalaka) which means “come here.” هَيْتَ لَكَ(haytalaka) is used as a seductive word, it’s not used normally. “Hurry up and get over here.” Allah doesn’t even describe how she was, we don’t even want to know, but she’s throwing herself at him, literally. At that moment, we learn the awesome character of Yusuf (alayhi salaam). All the guys that are on campus, all the guys that are in high school, all the guys at the workplace, all the guys that are just walking by at the mall, all of you guys that look and some girl texts you, and she says “you’re kind of cute, you want to talk, here’s my number…” Young people fantasize about this situation. Yusuf (alayhi salaam) is in this situation, and he can remember that Allah is watching in this situation, that’s the thing we’re being taught here. He turns and says قَالَ مَعَاذَاللَّهِ (qala maAAatha Allahi), I seek the refuge of Allah.

He’s saying that Allah took care of me, how can I be disloyal to Allah? She hears “my Master,” she might not even think Allah, she might think he means her husband who’s been good to me. If you can’t be fearful of God, at least think that you have a husband before you do something like this. إِنَّهُ لَايُفْلِحُ لظَّلِمُونَ (innahu la yuflihu aththalimoon) – wrongdoers don’t prosper.

He’s not going to prolong the conversation, it’s so awesome. When the story continues, he’s not like “no, no lady, you need to calm down and think about this, I’m sorry…” he knows she’s not into the talk. He ran for it. Don’t sit there and talk to the girl and tell her “it’s haraam sister, you really should think about what you’re saying…” Don’t give her advice.

You’re not giving her advice, you’re just spending more time with her. Be honest with yourself. Get away from there. Get away from that conversation, don’t pursue it further, don’t respond back to her.

You’re in Ramadan, don’t respond to her text messages. Don’t do it, make tawbah from it. Don’t even say “I won’t text you anymore.” Don’t say it. When she asks “why aren’t you responding to my e-mails,” don’t respond by saying “because it’s Ramadan,” just don’t even respond. Do not engage.

The same thing goes for the girls. If you guys want to really take advice from the Qur’an, this is real stuff. This is not just a story.

This is your story, this is what you’re up to right now. If you’re involved in this, and you’ve heard these ayat of Qur’an, Allah will ask you and me on Judgement Day, “these ayat you heard, did you think they were just stories?” It’s talking about you, He says. It is your mention, it is your story, it is advice for you. Don’t just read this story and think it has nothing to do with your dating life.

Or that it has nothing to do with your personal exploits that your parents don’t know about, or that your friends don’t know about. It does, it very much so does. It’s not accident that his is mentioned in the Qur’an. This is a timeless problem, and if you’re suffering from it, I pray that learning from the story of Yusuf (alayhi salaam) makes you really think about what you’re doing with your life. You’re praying, fasting, and you’re trying to read Qur’an, and you there’s a girlfriend.

There shouldn’t be. You really need to think that this is not a small sin. This is not something small you’re doing. You’re playing with your own faith.

I pray for you, and I pray that you’re strong enough to do the right thing, and cut off haram relationships, and if you cannot cut it off, then you make it halal. That you man up and you make it into a halal relationship. BarakAllahu Walikum, Wa-Salaamu Alaikum Qur’an Weekly